The first leg of the Atletico Madrid vs Liverpool final-16 match is expected to be a close match. Despite three Europa League finals and two Champions League finals in the last ten years, Atletico is the underdog in the fixture.

Atletico Madrid is currently in a slump with only one win in seven games in all competitions. Although they have one of the best defensive lines in Europe, their offense is not clicking now. In La Liga, the team only had 25 shots at goal in 24 matches. 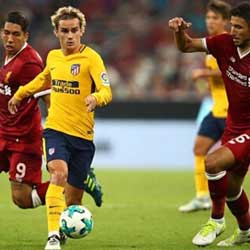 Based on sports wagering reports, Atletico Madrid’s offense is lacking for a world-class squad. As a result, expectations are very low for the team going into the game. However, that’s what makes the team dangerous.

Last year, Atletico Madrid managed to get a 2-0 win against Cristiano Ronaldo and the rest of Juventus in the first leg of the quarterfinals. However, they lost 3-0 in the second leg. In the Supercopa semifinals last month, the team came from behind and won against FC Barcelona, 3-2.

Thus, it would be best to never look down on the men coached by Diego Simeone. However, the squad is missing the services of Kieran Trippier, Joao Felix, and Diego Costa, according to betting odds sources.

On the other hand, Liverpool is having a great season. They won the European Supercup and World Championships earlier this year. Also, it has a 25 point lead over Manchester City as of today.

If everything goes according to plan, Liverpool will have five trophies this season. That is a historic feat for any European club.

It will be a battle between a solid defense and a weak offense. According to sports betting picks experts, the chance of teams scoring more than two goals is meager.