UFC 251 features several exciting matchups, including the Alexander Volkanovski vs Max Holloway fight. It is one of the main events during the fight night at the Yas Island. The UFC Featherweight belt is on the line.

Max Holloway defended the title against Brian Ortega and Frankie Edgar. He tried to go up in weight class. However, Dustin Poirier overpowered him via power punches and intense pressure. 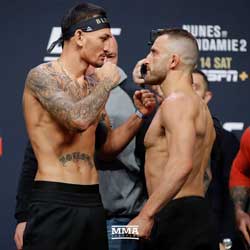 In Holloway’s next title defense, we lost against Alexander Volkanovski. The challenger landed 75 kicks, which was the difference maker in the match. Going into the rematch, no previous champion came back after losing to a unanimous decision.

However, Holloway is still young. He is younger than the champion, who is 31 years old. Both fighters are in their primes, which makes age a non-factor in the matchup based on sports betting predictions reports.

According to sports betting odds sources, Holloway trained on his own for the match. Hawaii was in strict lockdown during the pandemic. Thus, he had no choice but to do it on his own. On the other hand, Volkanovski is training twice a day with his coaches in Australia.

Sports forum users said that Holloway was more effective in the last two rounds of the previous match. It would be a closer match than their first fight, but some fight fans predict that the champion can pull it off. He would be the more aggressive fighter, and would throw more strikes than Holloway.

Bet on Alexander Volkanovski at -215

Volkanovski will win the vacant UFC Featherweight title in the rematch against Holloway. He is the more balanced fighter, and will land more strikes than his opponent on Saturday at the Yas Island, in Dubai.