The Ultimate Fighting Championship features the Amanda Nunes vs Felicia Spencer match. The former’s women’s featherweight championship title will be at stake. It will be the first fight for Nunes this year.

UFC 250 will happen at the UFC Apex in Vegas. However, there will be no sports betting fans in attendance due to the coronavirus pandemic. Here are our analysis and predictions on the UFC 250 main event. 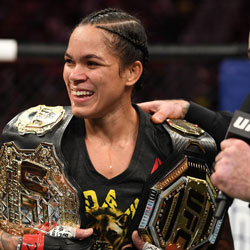 According to Korea Wager, Nunes made her professional MMA debut in March 2008 with Prime MMA Championship 2. She was part of Invicta Fighting Championships and Strikeforce before signing up with the UFC. She became the first Brazilian to win a title in the UFC when she won the Women’s bantamweight title in UFC 200 in July 2016.

Currently, she is in a ten-game winning streak. She won against some of the best women fighters today, including Ronda Rousey, Cris Cyborg, Miesha Tate, and Holly Holm, to name a few. According to sportsbook directory sources, Nunes is an aggressive counter-puncher. Also, she can end matches with a single shot.

On the other side of the octagon, Spencer was 5-1 as an amateur before she signed up with Invicta Fighting Championship. She had an undefeated record in the promotion before she signed with UFC. Her professional record is 8-1, with her lone defeat was against Cris Cyborg.

Spencer is at a disadvantage due to her lack of experience. Also, Nunes would be a step up in terms of competition. She is young and hungry and might give Nunes a hard time.

Nunes’ abilities are unlike anything Spencer has faced before. Although the latter would be a future UFC champion, it is still not good enough to stop Nunes’ winning streak.