The Bengals vs Browns rival match on Thursday kicks off NFL Week 2. The game features two of the previous three Heisman Trophy winners. However, success in college doesn’t always translate into NFL greatness. 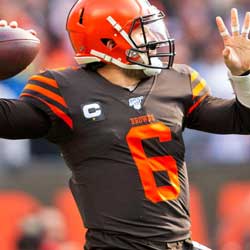 Both rookie QBs have a long way to go based on their Week 1 QB ratings of 66.1 and 65.0. They are fair from MVP Lamar Jackson’s rating of 152.1. He accomplished that by scoring 28 points against the Browns.

Joe Burrow was the first pick of Cincinnati in this year’s draft. He showed what he could do in the NFL when he called an audible that led to a touchdown run. In the last two minutes of the game, Burrow had a chance to win. However, he threw an unfortunate pick to a defensive lineman. It looks like he still needs to bond with his receivers, based on sports betting reports.

The Bengals defense also came up short. However, they came up big in scenarios when needed. They defended against two fourth-down attempts by the Chargers. Also, they stopped most of the attempts in the fourth quarter, except for the sustained TD drive.

On the other hand, Cincinnati is still suffering from its same fate as last season. They replaced their head coach and hired a better offensive line. However, Baltimore still had their number in Week 1. Based on sports betting odds, the Browns are the favorites at -255.

Bet on the Cleveland Browns at -255

Our sports betting pick for this Week 2 matchup is Cleveland. The Browns will win in this AFC North rivalry match. Both teams want to get their first win this season after losing last week. Most handicappers expect Cleveland to be the one that bounces back in NFL Week 2.