The Atlanta Braves and Philadelphia Phillies will play the first of their four-game series Thursday. We look at the lines for the Braves vs Phillies match and tell you our thoughts about the matchup. 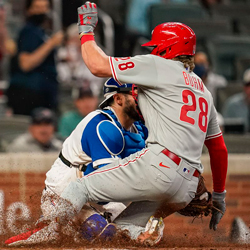 However, Moore hasn’t last for more than five innings in the seven starts. In his last start, he allowed six hits, two runs, and no walks. He had nine strikeouts in 4 1/3 frames for a no-decision against Miami.

The Atlanta Braves had a doubleheader against San Diego last Wednesday. They lost Game 1 3-2. The second game was suspended due to rain. At present, the Braves have a standing of 46-48 to be in third place in the NL East. They trail the Mets by four games.

Atlanta will miss Ronald Acuna Jr, who suffered an injury before the All-Star Break. Also, Acuna Jr led the team with 24 homers and 3.5 WAR. Coming in second is Freddie Freeman with 2.2 WAR and 22 homers and 5 runs-batted-in. In addition, Ozzie Albies added 15 homers, team-leading 63 RBIs, and thirteen stolen bases so far in the season.

Our sports betting pick is on Atlanta. Morton is better than Moore. Although the Phillies won against him two out of three times, it was mostly due to the lack of offense from the rest of the team.

2021-07-22
Previous Post: How to Place a Teaser Bet
Next Post: Hustler Casino Streams Poker to the World