The Celtics have many things going against them as they face the Bucks in the Fiserv Forum. The Bucks vs Celtics might be something Boston fans don’t want to watch on a Thursday night.

Boston is playing on a second straight night when it goes up against Milwaukee. On the other hand, the Bucks have an impressive record 19-2 home record. Also, the Bucks want to have revenge after losing to the Celtics last October 30. 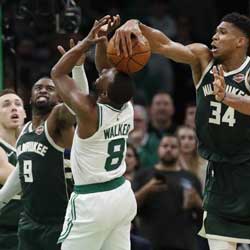 Milwaukee is the sports betting odds favorites at -8.5. Also, that’s the most significant underdog spread for the Celtics this season. It is larger than the previous underdog spread of +7.5 against the Clippers last November 20. On a side note, the Celtics lost that match.

Last Wednesday night, the Celtics lost to the Pistons, 116-103. People who bet on basketball said that it was the team’s fourth defeat in six matches. After Thursday’s game, the Celtics will go back home for three games. The good news is that Jayson Tatum will be back in the roster in time for the Bucks game.

The Milwaukee Bucks have a 36-6 record midway in the NBA season. They are on a four-game winning streak. Also, they led by more than 20 points in the last three games. Besides, their +12.6 average margin is the highest in the league to date.

MVP-candidate Giannis Antetokounmpo leads the team in average points per game. However, he scored only 22 points in the last Bucks vs Celtics game. If you bet on a player prop, make sure you bet for Giannis to go OVER his point total.

Although it might be tempting to bet on the Celtics because of the high line, the Bucks will likely dominate the visitors. That’s why our free sports betting pick is the Bucks.