J.B. Bickerstaff will make his Cleveland head coaching debut in the Cavs vs Wizards game on Friday night. He took over John Beilein’s position after the latter resigned earlier this week. Cleveland is currently 14-40.

Bickerstaff told sports news reporters that the players are refreshed and energized after the All-Star break. Also, they will try their best to get wins in their last 28 games of the season. The remaining games will provide a foundation on how the team will play under a new coach. 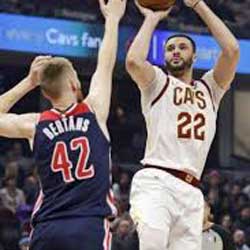 The Cavs went into the break losing 13 of their last 15 games. Also, they lost 35 out of 45 games under Beilein after their 4-5 start. They have the worst record in the East and second-worst in the league behind the Warriors.

Based on gambling South Korea reports, Bickerstaff has some NBA coaching experience. He was the head of the Memphis Grizzlies for 63 games in the 2017-2018 season after the team fired David Fizdale. Also, he coached the team last season. However, Memphis fired him when the team failed to qualify for the playoffs.

Cavs fans are excited about the Cavs after acquiring Andre Drummond. He is the current rebounding leader with 15.8 rebounds per game. In their last game before the All-Star break, Tristan Thompson scored 27 points and 11 rebounds. In the previous four games, Kevin Love averaged 19 points and ten rebounds. Love said that veterans like him are looking for ways to help the young players in the team.

The Wizards are looking to improve their playoff hopes. At present, they are three games behind Orlando for the eighth spot in the Eastern Conference. Also, they are only five games behind seventh-place Brooklyn.

Our sports betting predictions are in favor of Washington. The Wizards will have their way against the Cavs. Bradley Beal scored more than 25 points in 12 games in a row. No one in the Cavs lineup can stop him.