Chelsea vs Liverpool is a vital match in the tail end of the English Premier League. The former has the momentum after winning against Manchester United in the FA Cup Semifinals. Manchester United didn’t have the chance to win the game.

Chelsea played three players in its defensive line, and it looked like they are going to do it again against Liverpool. At present, Chelsea is third in the standing. However, it needs to win the last two games if it wants to maintain its spot. 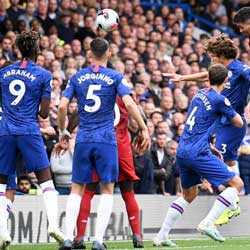 According to a sports forum, Liverpool is the Premier League Champions this season. However, they are never the same since winning the title mathematically. The team lost two and drew one in their last five matches. That was not how the team performed when it made its championship run.

Based on sports betting odds sites, Liverpool lost against Arsenal during its last fixture. Arsenal didn’t have many opportunities to score. However, a mistake by Virgil Van Djik allowed the team to take the lead and earn three points. Fans don’t expect Liverpool to give its all in the final matches.

In their last matchup, Liverpool won with a score of 2-1. Our analysts expect the opposite result on Wednesday. On the other hand, Chelsea wants to qualify for the Champions League. Also, a win against Liverpool would improve the team’s confidence before facing Arsenal in the FA Cup Final.

Our soccer betting pick is on Chelsea. We expect the team to come out and have a majority of the possession. Also, the team will show how Liverpool lost its motivation after winning the Premier League title. However, expect Mo Salah to score for Liverpool.