Choi Ji-man Hopes to be Healthier in 2022

Choi Ji-man hopes to be healthier in the following MLB season. In 2021, he spent several times on Tampa Bays’ injured list. Also, it was his sixth season in the Major Leagues. He returned to South Korea Tuesday after his third season with Tampa Bay.

In the 2021 regular season, Choi played 83 out of the possible 162 games for the team. He started the season on the injury list after knee surgery. During the season, the team sidelined Choi two more times due to groin and hamstring issues.

Choi told sports news sources that he was not a hundred percent yet. Also, he would receive treatments while in Korea. His goal for next season is to play more games. In addition, he wants to help the team win.

Choi Ji-man Hopes to be Healthier Next Season 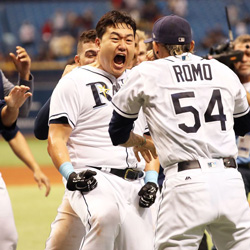 The South Korean first baseman said that they have great rehab programs. As a result, Choi expects to heal faster. In 2021, Choi batted .229/.348/.411 with 45 runs-batted-in and 11 homers. According to sports betting sources, the eleventh home run was Choi’s 50th homer of his career.

Choi said that his fans encouraged him to be better while he was struggling with his injuries. They continued to support him even when he was not playing. Also, he felt terrible for his supporters because he didn’t play that much in the 2021 season.

According to an online sports forum, fans were waiting for him in the airport when he arrived in South Korea. He signed autographs to thank them for their undying support.

Tampa Bay is famous for its ruthless approach to efficiency in developing a roster. They will let go of star players if they become too expensive. Thus, there are rumors of potential trades involving Choi because his price might be too high for the team. However, Choi doesn’t pay attention to those rumors.