It is the first time the two squads met after the Korean Series. The Bears swept the series to win their third KBO title in five seasons.

It was the second preseason day of the Korea Baseball Organization. Before the preseason started, the KBO allowed teams to play intra-squad games to prepare for the season delayed by the coronavirus pandemic. 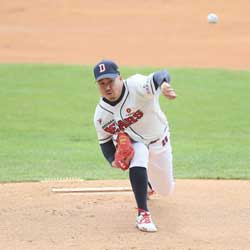 The KBO scheduled a shortened preseason that started last Tuesday. It allowed teams to face other teams. Also, the league announced that May 5 is the start of the regular season. However, the teams will play without fans in the stands, according to sports betting odds reports.

Doosan Bears scored three runs at the bottom of the second inning. Jung Soo-bin scored the first run with a double to the right field. Then Kook Hae-seong hit a sacrifice fly to make the score 2-0. Park Kun-woo scored a single to increase the lead to three.

Based on baseball and basketball betting sources, Yoon Jung-hyun started for the Kiwoom Heroes. Fans expected him to be a long reliever or a back-end starter. However, he lasted two innings in the preseason game. He threw 23 strikes out of 44 pitches. Also, he gave up three runs on just four hits.

Kim Jae-hwan was back in the starting lineup after recovering from a back injury that made him miss two games. He pinched hit a solo home run in the sixth inning to extend the lead to four. At the bottom of the eighth, Lee Heung-ryun hit a double for the team’s fifth run and the Doosan Bears win.