Sunday is the first game for the Washington franchise as the Washington Football Team. Thus, many sports betting fans are anticipating an exciting Eagles vs Washington match between the two NFC East rivals. 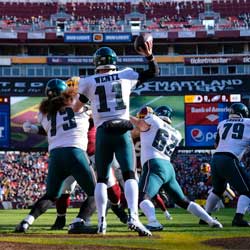 The NFL season is finally underway. It is the season when Washington will be using its new name, Washington Football Team. Aside from its name, the franchise made several changes. According to football betting reports, Washington will have a new head coach and an offensive coordinator.

Both coach Ron Rivera and offensive coordinator Scott Turner came from Carolina before signing up with Washington this season. Turner will turn the team into a passing squad. In Carolina, he used Christian McCaffrey as a receiver instead of making him run with the ball.

Also, Dwayne Haskin will be the QB for Washington. They will likely use Antonio Gibson as the RB based on football betting sources. He is flexible and is someone that the new offensive coordinator can work into his passing game.

On the other hand, the Eagles are looking for their seventh win in a row against Washington. Leading the team will be Carson Wentz with Miles Sanders as the running back. Also, the team added DeSean Jackson. They also drafted Jalen Reagor, who is still doubtful for Week 1 due to a shoulder injury.

In the last two seasons, tight ends of the Eagles got a total of 310 receptions. The second-highest reception total for tight ends was 223.

Who to Bet On for this Game

Bet on the Philadelphia Eagles at -6.0

Although the Eagles didn’t perform well in 2019, they were better than Washington in the standings. Thus, our sports betting picks are on them. Philadelphia will be able to win by one touchdown or more against the Washington Football Team.