Emart Team Manager Told Choo Shin-soo Just to Be Himself

Kim Won-hyong had an eventful week even before the start of the KBO season. The club signed former MLB All-Star Choo Shin-soo. Also, he learned about the team’s takeover through media. When asked about the star outfielder, the Emart team manager told Choo Shin-soo just to be himself.

SK Wyverns will be gone in the upcoming season. Emart owner, of the Shinsegae Group, bought the team from SK Telecom. They will reveal the new name on Friday. It caught Kim by surprise because he learned about it through the media.

On the other hand, the team managed to sign Choo Shin-soo. He will debut in the KBO at the age of 38. He brings instant credibility to the team as it transitions into a new brand a couple of weeks before the season. 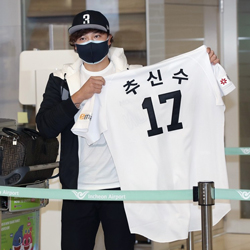 According to baseball betting pick sources, the team manager said that Choo doesn’t need to do many things. He added that the superstar’s presence is enough to set an excellent example to other players.

The team is currently conducting its spring training in Jeju Island. Baseball betting fans want to see what Choo can bring to the team. However, the team manager said that he wouldn’t ask Choo to do something special.

Kim said he liked Choo’s work ethic. The outfielder takes care of himself, and that’s how he managed to sustain his playing level at 38 years old. Young players can learn a lot from Choo and his daily routines.

Before signing Choo, Wyverns got Choi Joo-hwan from the free agency market. The team also signed Han You-some. People who bet on Samsung Lions might know him as Han Dong-min. Han set career highs during the 2018 season. However, he had two dismal seasons after.