In the last F1 race, Lewis Hamilton led from start to finish. However, it was a boring race for race fans. They expect Formula 1 Hungarian GP to be more exciting. Also, they don’t expect the two Ferrari drivers to take out each other in the first lap.

It is the third round of the championship, and sports wagering experts are expecting to see something like the Austrian GP. As expected, sportsbooks put Hamilton as the betting picks favorite for the race. 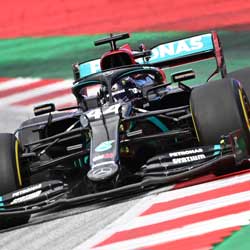 Hamilton won seven times at the Hungaroring out of 13 career races. Also, Mercedes is the best team this year. As a result, Hamilton has low odds of -154. Second and third are Valtteri Bottas (+300) and Max Verstappen (+400), according to sports betting sites.

Another driver with a strong performance this season is Carlos Sainz. At +700 for a podium finish, Sainz is a smart wager. However, it isn’t easy to trust the reliability of cars this season, even those from Mercedes. Thus, there’s a chance for Sainz to finish in the top three during the weekend.

At present, Bottas leads in championship points. Although Hamilton is the better driver, Bottas could win the World Championship this season.

Bet on Verstappen to win the race at +400

Although most race fans are choosing between Hamilton and Bottas, Verstappen can step up and win it in Hungary.