The Hanwha Eagles vs KT Wiz match will take place at the Hanwha Life Eagles Park on Friday. Hanwha needs a win to improve its standings and end its slump of losing seventeen of their previous 24 games. On the other hand, KT Wiz wants to add to its wins.

Hanwha Eagles’ bullpen allowed at least five runs in twenty-one of their previous thirty-two games. During their last match, Choi Jae-hoon and Jung Jin-ho got a total of two hits. Also, Jang Shi-hwan gave up a run and five hits in 7 innings. Thus, the Eagles lost 45 out of 61 games. Starting for the Eagles is Chad Bell. 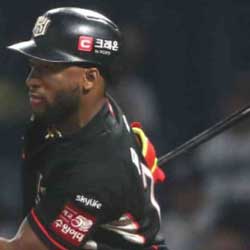 According to sports betting reports, KT Wiz’s offense generated at least four runs in fourteen of their previous twenty games. During their last match, Park Seung-wook and Bae Jeong-dae got a total of three hits. Also, the duo got three RBIs.

Based on baseball betting sources, pitcher Bae Je-seong allowed no runs and hits in 5.2 innings. Also, KT Wiz won 19 out of their previous 28 games. Starting for the team against the Eagles is Kim Min-soo.

KT Wiz has the advantage over Hanwha Eagles. The former won nine of their previous twelve games against the latter. Also, six out of the 12 matches had more than ten runs in total. As a starter, Kim Min-soo as an ERA of 5.88 and a WHIP of 1.81 in 59.2 innings this season. Also, he allowed three or more earned runs in four of his previous five starts.

On the other hand, Chad Bell has an ERA of 7.01 and a WHIP of 1.77 this year in 51.1 innings. Also, he allowed four or more earned runs in six of his previous nine appearances. Kim is better than Bell, and that can make a difference in the matchup.

KT Wiz is the favorite based on sports betting odds. They have the momentum with their four-game winning streak, and it would not end in the game against the Eagles.