Hwang Ui-jo Waits for Transfer Out of Ligue 2

People expected Hwang Ui-jo to transfer out of Ligue 2 during the summer. However, the French league is already ongoing, and Hwang remains with Bordeaux. He was the team’s scoring leader last season when they were in the top tier.

According to football betting sources, Bordeaux needs to raise funds fast to meet its restructuring goals. The team was relegated to Ligue 2 after it finished within the relegation zone. Also, it faces relegation to the third tier due to its financial problems.

Bordeaux’s creditors accepted a restructuring plan to avoid relegation to the third tier. But, first, it needs to sell some of its assets, including Hwang.

Hwang Waits for Transfer Out of Ligue 2 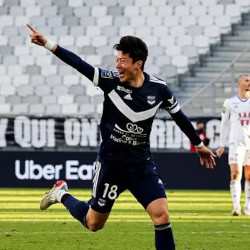 Many sports betting experts have been waiting for Hwang’s transfer. Some of the favorite destinations for Hwang are West Ham in the Premier League and Nantes in the Ligue 1. Although the West Ham deal is unlikely, Hwang mentioned the team last month. Thus, fans thought that negotiations with the club were ongoing.

On the other hand, Nantes has been linked with Hwang for months. If he ends up in Ligue 1, Hwang will be the only Korean in the league because Suk Hyun-jin recently transferred from Troyes.

Hwang’s transfer is the easiest way to solve Bordeaux’s financial problems. In 2021, Hwang scored 12 goals for the team. Several clubs were interested in him, including Sporting Lisbon and an unnamed Russian squad. However, negotiations failed during the transfer window.

Bet on football with VOBET, the best sportsbook in the world!