History was made in the K League 1 Sunday after Jeonbuk Hyundai Motors won its 5th K League 1 title in a row. Their win against Jeju United gave Jeonbuk 76 points for the season and the title.

Ulsan Hyundai FC had the chance to win the title Sunday. Although Ulsan won against Daegu FC, the team finished in second place with only two points separating the top teams. According to sports betting reports, Jeonbuk now has nine K League 1 titles, the most than any team in the top Korean soccer league. Also, they are the first team to win five straight championships.

On the other hand, Ulsan hasn’t won a K League title since 2005. Also, they extended their league record of ten straight second-place finish. Jeonbuk came into the Sunday game on top of the leaderboard with 73 points. On the other hand, as per sports news reports, Ulsan was two points behind. 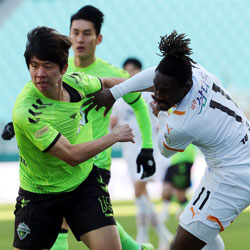 The Sunday games started at the same time. Ulsan scored first in the 18th minute. Also, they scored again just before the end of the half. According to sports betting odds experts, Jeonbok was scoreless in the second half. As a result, Ulsan fans were hopeful that they could get a good result after the Sunday games.

Kim Sang-sik led Jeonbuk to the title in his first year at the helm. However, he spent seven years as an assistant coach of the team. As a result, he knew how the system works. Throughout the season, Ulsan and Jeonbuk were neck-to-neck. Finally, Jeonbuk got the lead after winning over Ulsan last November 6.