People who bet on volleyball know the value of Yang. She is a veteran blocker and a constant member of the national team. Also, she was part of the team that got fourth place in the 2020 Summer Olympics. 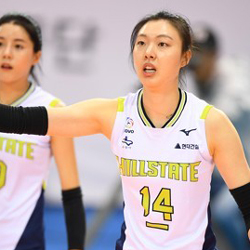 Yang started her professional career in 2007. She debuted with Hillstate and stayed with the team since then. Also, she led the V League in blocks for twelve straight seasons. She recorded 0.74 blocks per set this season.

Also, Yang is the top MVP candidate this year. According to a sports forum, Hillstate has been dominant throughout the season. They are on top of the standing with 82 points after winning 28 and losing three games.

The V League cut the season short after the high number of COVID-19 cases among players. It was the second one in three seasons that ended prematurely. Also, Hillstate failed to win the title despite dominating the whole season. The team was a win away from winning the title.

Hillstate also failed to take home the title in 2019-2020 season. The season ended after only five rounds. Although the team was on top of the standing, they failed to win the title. The last time they won the championship trophy was in the 2010-2011 V League season.

Bet on volleyball games with VOBET, the best sportsbook in the world!