The Valencia vs Atletico Madrid game will take place at the Mestalla Stadium on Friday. It is the first game of the 24th round of La Liga. Also, Atletico Madrid is at 4th place at 39 points. On the other hand, Valencia is 7th with 37 points.

Their first match this season ended in a 1-1 draw. However, Atletico is undefeated in their last ten head-to-head clashes with six wins. Only one of the previous five games had more than 2.5 goals. Also, both teams scored goals in three games. 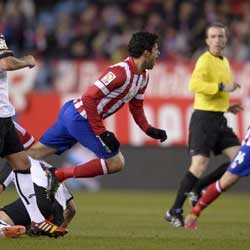 Soccer forum sources cited that Valencia failed to win the last four games at Mestalla Stadium. Also, the team scored only two goals during those games with no more than one in any of the matches.

Valencia is coming from a forgettable week. According to football and e-sports news, Granada eliminated them in the Spanish Cup by Granada. Then, they lost to Getafe 3-0 in a La Liga match. Two of the last five games of the team produced more than 2.5 goals. Only one game had both sides scored a goal.

On the other hand, Atletico Madrid won a game last Saturday against Granada. It ended the team’s five-game winless streak, four of which were defeats. The team struggled in their offense as it scored only two goals in the previous six matches. None of its last five games had more than 2.5 goals. Also, only one of the five games had both teams scoring at least a goal.

Although Valencia is impressive at home, the visitors want to improve their La Liga standings. Thus, our sports betting predictions will be for a low-scoring game with Atletico winning.