Tampa Bay Rays’ Choi Ji-min resumes training after being sidelined for around two weeks due to a knee injury. He told Korean sports news reporters that he can’t wait to get back to the field. Also, he added that his rehab was taking longer than he expected it to be.

Choi learned two things during his downtime. He said that he had to deal with pain and that rehab could take longer than he initially thought it would. It had to stay inactive for a long time after an MRI exam showed a right knee inflammation last March 13.

After a long time, he took some swings at the batting cage last Mach 25. Also, he played catch. According to sports betting odds sources, Choi wants to return to the field as soon as possible. At the end of February, he reported suffering pain in his right knee. Thus, he had to rest for several days. 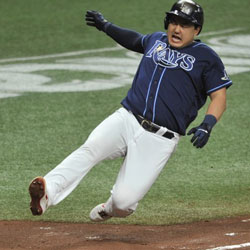 The pain in his right knee flared up again earlier in March after playing in five spring training games. He had three walks and a single RBI. Also, he batted .364/.500/.455. After weeks of being inactive, he said that it felt good to be training again.

However, he doesn’t know when he will be back on the active roster. Although his rehab is going well and feels that he can play, his trainer still needs to check his physical condition. People who bet on sports will not see him as part of the opening day roster on April 1.

Choi is disappointed that he can’t help the team at the start of the season. Thus, he will focus on getting better as soon as possible. With Choi out of the roster, Tampa Bay might put Yoshi Tsutsugo or Yandy Diaz at first base.