Phoenix will defend their home court Wednesday night in the Nuggets vs Suns Game 2. The Suns hopes for another balanced scoring from their four starters. 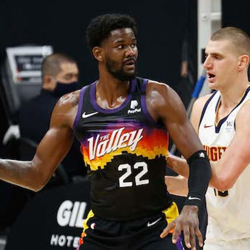 Sports betting pick experts expect the Phoenix Suns to replicate their performance in Game 1. Their four starters scored at least 20 points. Also, Deandre Ayton served as the team’s defensive anchor. As a result, he held Nikola Jokic to 22 points out of 23 shots. It was only the third time that Jokic attempted more shots than his points.

Michael Porter Jr. is questionable after sitting on the bench more often than average in the second half of the first game. Also, Denver changed Will Barton’s status from out to doubtful. On the other hand, PJ Dozier and Jamal Murray remain on the injured list.

According to Korea Sports League News reports, Denver struggled to score in the first game. Ayton stayed with Jokic, and the other defenders guarded their marks closely. As a result, they closed the passing lanes, making it difficult for Jokic to pass the ball around.

The Nuggets need Jokic to do more in Game 2 if they want to level the series to a win a piece. They are missing two of their scorers in the next game. In Game 1, Porter scored 15 points. However, he was visibly not a hundred percent in the second half.

Our online sports betting pick for Game 2 of the Nuggets-Suns series is on the Suns. They are the better team. Also, they have more margin for error due to the backcourt tandem of Chris Paul and Devin Booker.