Lee Geun-wook had his first career start in the Korea Baseball Organization. The Wyverns pitcher got 1st KBO win Thursday against the Doosan Bears. In the fourth inning, Lee was on his way for a perfect game.

In the entire KBO history, there has never been a perfect game. Lee blew his chance to be the first KBO pitcher to achieve a perfect game in the fifth inning when he gave up a double to Bears’ Kim Jae-ho. Wyverns’ center fielder and right fielder tried to keep the perfect game alive but failed to catch the ball.

When the ball dropped, Lee wasn’t disappointed at all. He was worried that Ro Soo-kwang and Jeong Jin-gi were hurt because they barely avoided a collision. Before the start of the game, he thought about pitching for three innings and getting a hitter each inning. 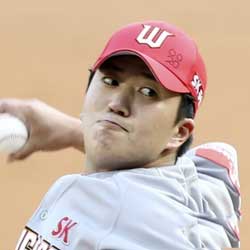 Lee had to deal with several injuries since he was drafted in 2014. It is already six years since, and he only played in six KBO games. Also, it was his first start last Thursday. He had a lot of potentials. Online sports betting sites touted him as the next big thing in Korean baseball after beating Shohei Ohtani in 2012 during the Under-18 Baseball World Cup.

However, things went downhill for his career when he became a pro. According to sports news archives, he suffered from various injuries from ankles to his pitching elbow. He played a single game in 2016, and two games in 2017. Then, he enlisted for mandatory military service for two years.

After the double broke his perfect game, he walked the next batter. However, the team believed that he could pitch his way out of trouble, which he did. When the game was over, he felt numb. He said that he dreamt of that moment for years.